The Intercept, Reconnaissance and Defense Starfighter, also known as the IRD, was designed by the Corporate Sector Authority towards the end of the Old Republic era. Safety and efficiency were priorities when the ship's blueprints were drafted, with the aim of making the ship an instrumental part of the Corporate Sector Picket Fleet.

Boasting swift sublight speed, a moderate sensor array, and twin heavy lasers, this fighter is still used for short range flights in-system or from the hanger of a larger ship. The IRD's nimble design allows pilots to maneuver around less skilled combatants and less able ships with ease. Due to the short range nature of this ship and the lack of a hyperdrive, integrated life support systems are only built to last for a limited time.

Currently, the IRD Starfighter is still used by the Corporate Sector Authority; however, they have also looked into the possibility of developing an upgraded version of the ship. Despite the tight grip that they have on their systems, this ship has also made it into the possession of other government forces, paramilitaries groups and private collections. 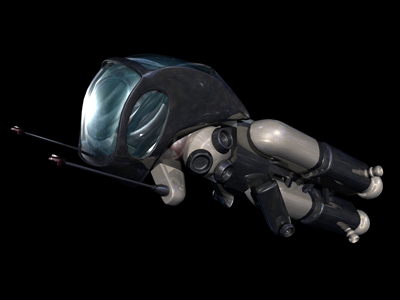