The HH-87 Starhopper is a long-range fighter that exists in sporadic numbers across the galaxy. Built by a now defunct starship company on Nal Hutta, the ship is easily recognizable and can occasionally be seen in the service of minor fleets. The Starhopper sports a distinctive look, with folding wings, visible armor plating and a prominent prow hearkening to the looks of the sail barges and caravels of Nal Hutta's rulers.

Beyond looks however, the HH-87 is considered below average compared with contemporary fighters of its type. It packs a substantial punch with its complement of two laser cannons, but only has moderate armor plating and lacks any sort of deflector shield. This combined with its slow sublight speed makes it unsuitable for protracted combat. The ship does have the advantage of a small hyperdrive, giving it some versatility not always found in other fighters. However, this has not been enough to save it from being eschewed by larger military organizations that are able to afford the cost of more advanced fighters.

Despite being seen as unsuitable for military duties, the Zygerrian Slave Empire was known to use the HH-87 in combat during the Clone Wars. Its versatility and cheap price has also made it a useful tool for criminal bosses with little concern for combat effectiveness, including the Hutt cartels who were patrons to its design. As a result, it has often been seen on patrol duties and in the capture of lower-level debtors and enemies. At one time the ship did see a renaissance in the hands of law-abiding citizens and adventurers when it became a popular novelty ship. However, mainstream success still evades the HH-87 Starhopper. 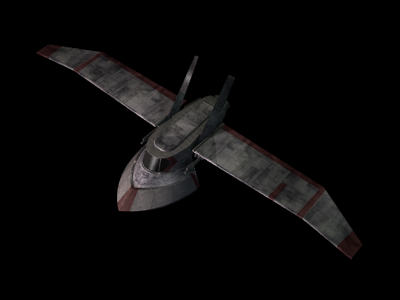