The LNR I-Series turbolaser cannon, one of the earliest prototyped weapons systems of the Galactic Civil War, was created to fire on orbiting ships from the surface of planetary bodies. Its predecessors resulted in immense power drains across defense grids, so the LNR I was created to fill the need for a more efficient turbolaser defense platform.

The LNR I is minimally designed, with a single-barrel cannon resting on a pyramid-shaped platform. The platform's unique design allows the turbolaser to use any horizontal firing solutions deemed necessary, while the cannon's mount creates an unprecedented range of firing arcs.

Although its successor has found wider usage, the LNR I continues to provide credit-strapped colonies with enough firepower to defend against would-be invaders. The ease with which organizations and private land owners can afford this measure of defense has allowed for its continued existence in the weapons market.
« Back To Top 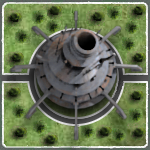