Conceived during the early days of military warfare, stun grenades, commonly known as "flashbangs", are among the most widely used non-lethal weapons in the galaxy. Primarily used to incapacitate targets in situations where collateral damage is unacceptable, the grenades are designed to disorient most organic targets for a few seconds. However, stun grenades are not effective against droids and EMP grenades fulfill the same role for automatons.

While stun grenades have historically taken a wide range of forms, most modern designs consist of ellipsoid-shaped shells containing flash powder. The flash powder is triggered by the pull of a pin, but levers on both side of the grenade act as a safety mechanism to prevent accidental detonation. Once the grenade is detonated, a flash of light is produced that blinds most sentient beings and leaves an afterimage on the sentient's retinas that hinders aiming. The light is accompanied by a deafening sound that drowns out any ambient noise, as well as causing the individual to lose balance by disturbing fluids in the ear canals. These issues are exacerbated by a shell design that amplifies the already considerable decibel output of the explosion, increasing the grenade's operational range and effectiveness.

The stun grenade has been used across the galaxy by various governmental, law enforcement, and paramilitary agencies. Stun grenades are especially useful in hostage rescue situations, where the risk of injuring or killing hostages is high and unacceptable, while bounty hunters often deploy the weapons to capture targets alive. Despite the non-lethal design, stun grenades have been known to injure, maim, or kill by accident. The heat generated by the detonation can set fire to some materials, while smoke inhalation, shock, and severe burns are risks to some beings in close proximity to the detonations. 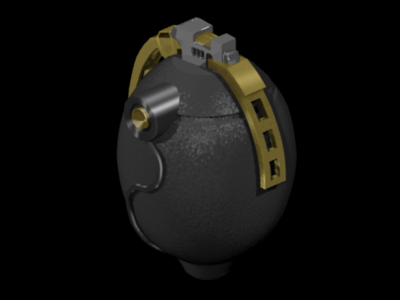