Designed by scientists of a mining company in the Athega system, the massive Shieldship is an unusual escort vessel for a specific purpose. The concept behind the corvette class ship was to deflect the powerful rays of the Athega sun and protect accompanying ships to the surface of the planet Nkllon.

The bow of the vessel is a disk-shaped, super-cooled armored shield capable of withstanding the thousand degree temperatures and radiation that would melt the hull of most starships. Although from afar the disk appears as a smooth reflective surface, the underlying systems are a network of coolant-laced pipes and tubes. Massive pumps housed near the origin of the shield circulate hundreds of gallons of coolant, while fans embedded in the tips of the twelve protruding fins cool the liquid and allow for further circulation. However, due to the severity of the sun rays that assault the shield, the Shieldship required full replacement of the coolant systems after each voyage to the surface of Nkllon.

Each ship requires a crew of five to successfully operate, due to the complicated systems necessary to keeping the ship cooled. Along with the advanced cooling systems, the ships are also equipped with slave systems which allow the vessel to remotely pilot ships, the primary purpose of the Shieldship. The lack of a docking bay required enslaved ships to have a hyperdrive in order to complete any escort trip.

Aside from the specific use they were designed for, Shieldships have found few other uses throughout the galaxy. Lacking any major cargo capacity and being limited by their slow, stock hyperdrive, any remaining vessels are still commonly used in an escort capacity or purchased for their advanced slaving systems and then scrapped. 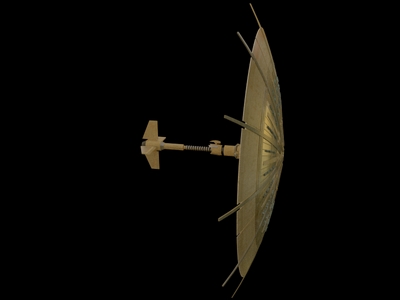