The Adz-class Patrol Destroyer was developed toward the end of the first Galactic Civil War by the Galactic Empire for the purpose of tracking and pursuing targets through hyperspace. Given the increasing threat of rebel activity and the growing strife in the galaxy, the Adz was designed to serve as an independent support ship for the Imperial fleet in the roles of patrol and customs inspections for illegal contraband. With long term deployment away from the Core in mind a significant amount of automation was built into the design, with several redundancies, giving the destroyer a rugged electrical system.

Due to its advanced weapons systems, crews are able to target their opponents with ease and precision. In comparison to its overall passenger capacity the crew requirements for this destroyer are small; this leaves room for an adequate boarding party. To augment its light armament, the Adz increases its offensive capabilities by maintaining a strong fighter presence on board. As a result of their current widespread distribution one may see many varieties of fighters launched from its docking bays. This ship has hyperspace capabilities to match most other capital ships as well as many large civilian freighters, but is generally outpaced by varieties of smaller freighters and fighter class ships. For this reason, some of these vessels opt to carry fighters with faster hyperdrives to engage these foes if their ion cannons can not deal a disabling blow before pursuit is necessary.

The Adz Patrol Destroyer is a valuable light warship when considering its decent hyperspace capabilities, above average sub-light speed, sensor array and shield superiority among other ships in its class. The ship's versatility finds use in many modern fleets throughout the galaxy for system and sector patrols, as well as for monitoring shipping around important locations of the galaxy. It is likely that they will remain in service for a long time to come. 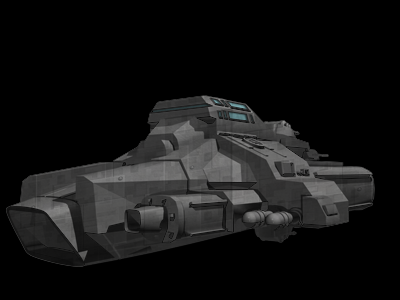