The Bayonet-class Light Cruiser is a small capital-class warship commissioned for use in the Imperial Navy. It features the iconic dagger-shaped frame that is common in other warships such as the Imperial Star Destroyer. This type of frame offers a significant strategic advantage during battle by allowing the Bayonet to concentrate its entire weapons compliment in a forward firing arc, while exposing very little of its own mass to return fire. This directly opposes more traditional tactics of exchanging massive broadside salvos with extensive damage resulting for all involved. The ability to fire all weapons forward also makes the Bayonet well-suited for intercepting and pursuing fleeing ships. This proved especially beneficial when the Bayonet began operations in the Mid and Outer Rims.

During its time spent patrolling and surveying in the outlying territories of the galaxy, the Bayonet demonstrated its effectiveness by combating pirates and smugglers who had long plagued the region. Most of the outlaws were unwilling or unable to confront a capable military force and would attempt escape into hyperspace or to a nearby planet. If a fleeing vessel was fortunate enough to make it to a planet, it could usually lose its pursuers by descending and crossing over the horizon or landing in thick vegetation to avoid detection. However, these tactics were rarely successful when employed against the Bayonet. The relatively light mass of the Bayonet enables it to maintain a controlled entry through the atmosphere to continue the pursuit, or land on the ground if necessary. More importantly, the powerful engines and repulsors of the Bayonet are sufficient for the ship to escape gravity and return once again to space. This capability was further underscored during missions involving planetary subjugation and suppression of uprisings, the latter tending to occur more frequently in areas far from the galactic center.

The many successes of the Bayonet are largely attributed to its design. During early conceptualization and planning, the engineering team responsible for the project hoped to achieve a more aggressive profile for a warship. The final product was the imposing, dagger-shaped frame for which the Bayonet-class was named. The main deck of the ship is flat and broad, well suited for mounting various weaponry. Above and below the main deck are additional decks that run nearly the length of the ship and contain all the primary support systems. Docking and hangar bays are also included and provide the Bayonet with fighter and vehicle support while on deployment. The command deck is elevated and positioned near the rear of the ship with a portion of the primary engines. Having a greater panoramic view of the battlefield, the Bayonet can act as a strategic command ship. This also serves to reveal the profile of the ship to the pilot, who can more easily maneuver through combat space filled with operational, derelict, and dying ships. The Bayonet is widely respected as being both capable and versatile, as made evident by its extensive and continued use in many fleets across the galaxy, despite the availability of superior warships. 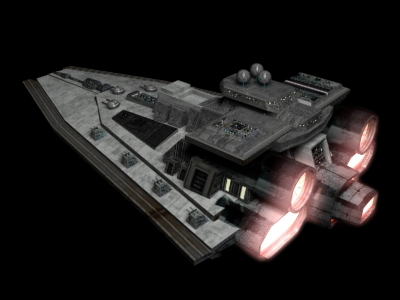