Fielded primarily by the forces of the Tresario Star Kingdom, the Guardian Flight suit is a remarkable piece of Anzati Engineering. The guardian flight suit is a multirole piece of equipment, functioning as a pilot's daily jumpsuit but also an emergency vacuum suit when paired with the rest of the corresponding guardian equipment. The flight suits computer was capable of limited communication with the Razor Starfighter, providing real-time life support and vital readings to both the pilot and a nearby command ship.

The Flight suit was designed to provide for a pilot in all situations, including atmospheric and ground. During atmospheric use, the flight suit was capable of regulating its internal pressure, functioning as a G-Suit for pilots. It was also equipped with an array of pockets for sidearms, rations, and other survival gear such as flares.

Activated automatically during an ejection, capacitors stored within the guardian flight backpack energize the woven durafibers within the flight suit. This contracts the fibers, making the suit rigid and more durable but also sealing it against the cold vacuum of space. While this limits and slows movement, it does provide limited enhanced protection from debris during an ejection. This feature can be activated manually and thus the Guardian Flight Suit can be used for limited EVA use in atmosphere-free conditions. 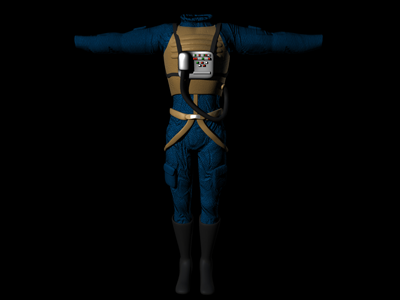