The Imperial Uniform is the standard issue military raiment worn by officers in service to the Galactic Empire's military. The complete dress uniform consists of dress trousers, a double breasted tunic decorated with a simple rank badge on the left side, a cap, a black belt, gloves and black boots. Tailored from very durable inorganic fibers, the cloth is also enhanced with durasteel threads that provide some protection against direct attacks, while not over-encumbering the bearer. While the protection is minimal and would not block a direct blaster hit, it is enough to lessen the impact of a ricochet or primitive weaponry.

The basic design upon which the uniform is based has not changed in many centuries. Though it was already in use long before space travel was invented, Imperial technicians modified the design to fit the Empire's needs. In addition to providing relative comfort and functionality, it can be manufactured very cost-effectively in vast numbers. Every member of the Imperial military is issued a batch of eight uniforms, one being a dress uniform which is specially designed for official occasions.

Though not visible at first glance, the uniform posses several pockets and provides enough room to stash datapads or other tools needed for day-to-day duty. The code cylinders that each officer is issued have a place in special chest pockets. On the right breast, the uniform sports a sturdy panel on which the military member presents badges. This part of the uniform allows officers a little pride in their achievements. Typically the left shoulder is similarly fashioned to accommodate unit or mission ribbons, or service awards, while the rank insignia are placed on the left part of the chest flap. The colors of the uniform vary to distinguish the functions of the men wearing them, ranging from olive or grey drab to black.

Whether they are in the relatively ordinary uniform during routine duties or sharply attired in their dress uniform for a military parade, any officer who wears this uniform demands respect from his subordinates and is recognizable to sentients across the galaxy. 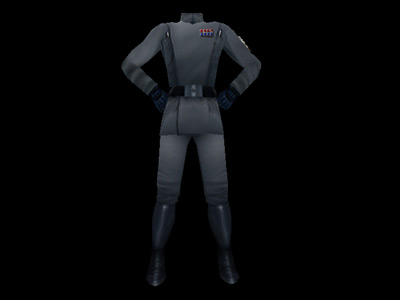