The Supremacy-class Attack Ship is rarely heard of any more. Few beings would even recognize one, if the opportunity presented itself, as the old ships have slipped from the history of galaxy and settled deep into the illusion of myth.

Four millennia ago a sector commander of the Old Republic was sent to investigate a strange signal that had emanated from an unknown region of space known as X-110. He prepped his small fleet and leaped into hyperspace, but was never heard from again. Before an investigation could be conducted, the galaxy found itself in yet another galactic conflict, now known as the Sith Wars, and soon the small fleet was forgotten amongst bureaucracy of war.

During yet another time of conflict, a number of wrecked vessels were discovered by Imperial forces loyal to Grand Admiral Veynom, in an asteroid field within the X-110 system. The fleet marked the location before continuing on its way, the wrecks were later salvaged by a Hapan aristocrat.

From the remains of the Old Republic fleet, the Supremacy-class Attack Ship was reborn. Its restoration was a monumental task, with the other wrecks that were found in the asteroid field being cannibalized for parts. While every effort was made to keep the original design intact, many upgrades to both shielding and armour were also implemented. The ship's hull was damaged beyond recognition — pitted and dented by thousands of years of asteroid collisions and exposure to large amounts of radiation. The engineers involved in the repairs worked around the clock for the better part of a year to bring this ship to its current glory. New armour plates were molded out of a revolutionary meleenium alloy, allowing the Supremacy-class Attack Ship to compete with more modern craft. New hard points were added for weapon placements and the extra weapons allow the attack ship to decimate formations of fighters, or defend itself from capital ship attacks.

Upon completion of repairs, the new owner was disappointed in the overall performances of the vessel, and it was sold. The Supremacy-class Attack Ship changed hands several times, and, if rumors are to be believed, then it is currently owned by one of the many groups of pirates throughout the galaxy. 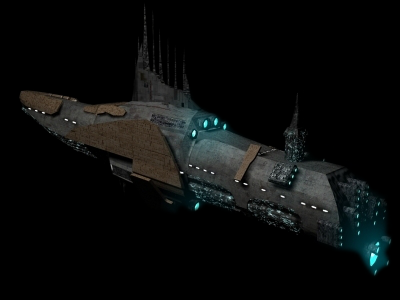