The Lictor-class Dungeon Ship is certainly one of the more distinctive space-faring vessels the galaxy has produced over the years. Where designers often aimed for maximum firepower in the Star Destroyer and Mon Calamari lines, and others like Lucrehulk were personified by their storage capacity and trade power, the Lictor carved itself an unusual niche, where it reigns supreme and uncontested: being a maximum-security detention facility.

The ship traces its roots to the Mandalorian Wars over 4,000 years ago, where Mandalorian forces required effective means of keeping their captured adversaries under control. The Mandalorian engineers partnered up with their Rendili counterparts and set out to create a brand new design that could contain even the most powerful individuals. The lovechild of their efforts was the Lictor-class dungeon ship: a gargantuan space prison which rivals the Hapan Battle Dragon in size. Each Lictor was equipped with a number of turbolaser batteries, but the majority of its security potential was focused inwards, not outwards. The insides of the ship contained detention cells that could accommodate hundreds of unlucky convicts, coupled with a large number of diverse ways to control the prisoners once they had been detained. Aside from the more common methods of containment, the Lictor was equipped with numerous ship-bound security droids able to assist with an unruly inmate at a moment's notice, as well as multiple aural and chemical dispersal systems able to quell an uprising in an instant. More recent upgrades by the Rendili engineers included universal energy cages, detainment calls capable of negating and reflecting Force powers and allowing the ship to hold powerful Force users aboard alongside regular inmates.

It is unknown whether the creators of this awe-inspiring behemoth knew just how popular their design would become. Following the conclusion of the Mandalorian Wars, the Galactic Republic was quick to commission its own prison ships and countless regional governments, crime lords and private individuals were soon to follow. Despite the age of the design, and that most of the upgrades were removed as standard features and were included as optional extras, the Lictor is still synonymous with security and reliability. It was created to intimidate and to stomp out any and all embers of resistance smouldering within its involuntary passengers, and most denizens of the galaxy unfortunate enough to have been held inside a Lictor agree that the ship is more than sufficient for this task. 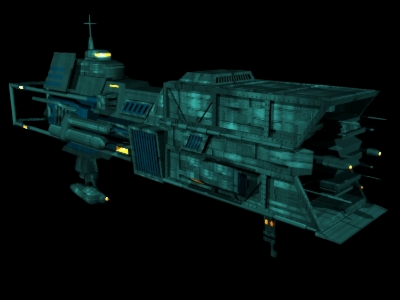