To complement the defense forces of Black Sun, two years after the syndicate’s creation, the Darkstar Battleship was produced to act as a flagship for their fleet. Under the command of either Black Sun's regent or the head of their navy it is a ship built for naval warfare and anti-capital combat.

Requiring a significant number of crewmen to adequately staff the vessel, the Darkstar is built to fulfill the roles of flagship, carrier and heavy escort. Due to its ability to carry up to 60 viper squadrons, its anti-fighter armament was removed to make way for larger numbers of turbolasers. Thought to be based upon Hapan and Bothan philosophies, the Darkstar Battleship relies on unrelenting firepower to win the day. This is evident in its shielding which has been reduced to allow for more tractor beams and yet more turbolasers.

The Darkstar is often able to destroy the enemy before that enemy even has a chance to fire, and that capability is both its greatest strength and its greatest weakness. Although it is heavily armed, the Darkstar can be overwhelmed in a large battle when targeted by multiple combatants. And though the vessel boasts equal firepower to any battleship in its class, it lacks anti-fighter weapons, long range sensor pods, and speed. If its Viper squadrons were ever disabled or destroyed, then it would be relatively easy for fighter groups to destroy the Darkstar.

Though heavily armed and desirable to many, the Darkstar Battleship is unavailable for purchase by any individual or group. 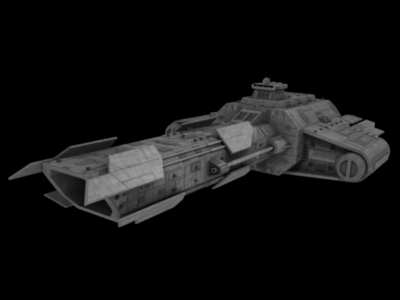