Originally developed by Appazanna Engineering Works, this esoteric air speeder features a design unique and exclusive to Wookiee engineering. Named after a reptilian predator native to the coastal waters of the Wookiee homeworld, Kashyyyk, the Oevvaor Jet Catamaran utilizes handcrafted Wroshyr wood in the construction of its twin flotation hulls, giving the craft the strength and durability for which these trees are renowned. Designed originally for civilian use, such as sporting and fishing, this catamaran is a recreational vehicle that includes insect-like wings between the twin jet-propulsion pods for smooth and stable air performance. Famed both as an example of Wookiee humor and as a low-tech artificial horizon while in flight, a 'Hula Human' is mounted in the cockpit of each craft. Unfortunately for designers, this decor has caused a decrease in sales throughout Hutt Space due to the word 'Hula' being a derogatory term in Huttese. Defenders of the 'Hula Human' often look to the most popular counterargument: Hutt body mass incompatibility with the narrow hull and jammed rudders would be problematic in the Nal Hutta swamps. Public opinion regarding the issue has varied since the craft was introduced.

As with many vehicles, its use in combat has brought about many changes. During the Clone Wars, the Battle of Kashyyyk saw the Wookiees adapting the catamarans into service as airborne firing platforms, particularly along the coastal areas. Wookiee warriors fired their small arms or light blaster cannons from the passenger seats down onto the invading droid army in a series of quick strikes before retreating to the cover of the trees and coastal waterways. Following the war, many of these catamarans were refit as defensively oriented craft with the inclusion of an integrated blaster cannon. By the time of the Black Forest Massacre, six years after the Rebel Alliance declared war on the Empire, the armed variant had become the most common catamaran in service. Once again it was put to use in the defense of Kashyyyk, this time attempting to fight off the invading Imperial ground forces. While the greater firepower made it more effective against infantry than during the Clone Wars, the light blaster proved a minimal threat to the AT-ATs of the heavily mechanized Imperial force. Perhaps the greatest complaint with Wookiee commanders was the low survival rate among the crews manning the vehicle. This was due to the exposure of the crew, the limited air speed, and the inadequate protection of the Wroshyr wood against heavy blasters.

Despite its unusual design and controversial service record, the Oevvaor Jet Catamaran has endured and is now found across the galaxy within private collections as well as mercenary, pirate, and paramilitary forces. Like many mechanical creations of Wookiee origin, it remains a highly customizable vehicle that is easily maintained thanks to its pod-based engines and simple material composition. In some cases, this has forced the original Wroshyr wood hull to be replaced as this material is very hard to find outside Kashyyyk. The vast majority of the remaining catamarans in circulation today come from models produced after the Clone Wars, making those variants that have included integrated weapons by far the most commonly available. Following the Kashyyyk Massacre, Appazanna Engineering Works ceased production while the planet was occupied. It has taken years for limited production to resume after the planet was liberated by the New Republic. Despite sale issues within Hutt space, each catamaran still includes a complementary 'Hula Human' mounted in the cockpit. 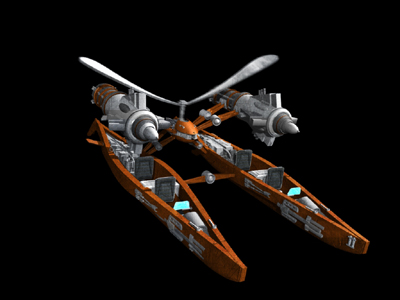 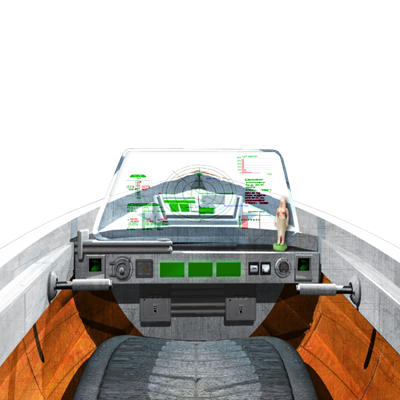