The S19 astromech was the first and only product of a small droid collaborative within the now-defunct Avance Coalition, who wanted to compete against the popular R-series astromechs. In order to differentiate the new droid from the ubiquitous round bodies of the R-series, the designers opted for a boxier chassis reminiscent of the GNK power droid. When released to the market, initial reviews marked the droid as "far from elegant" which decreased the public demand for the droid.

The S19 has a boxy chassis with one claw appendage for picking up small objects and six various tool appendages. Some owners have used these appendages to their personal advantage by stashing valuables inside the droid, or even having the droid smuggle small blasters into protected areas. The S19 model also included an internal comlink for communicating between the owner and other droids along with a holorecorder to record and project conversations and holovideo. The droid moves via a single track, though small rollers are built into this track to allow it to turn. Due to this design, however, the S19 astromech has had stability issues and regularly tipped over during fast movement requiring any degree of turning. To prevent this, many droids were programmed to come to a complete stop prior to any change of direction.

Like the R-series and a number of other astromech models, the S19 contained an astrogation buffer with the ability to store the calculations and coordinates of five hyperspace jumps within its memory banks. The S19's main drawback was its awkward and bulky design, which kept it from being compatible with the droid ports of starfighters. However, the droid's chassis could be reinforced and used as mobile cover during combat, providing more protection than a slimmer, round model could.

Within a year of release, the Avance Coalition decreased the price of the S19 due to the negative reviews and obvious design drawbacks. Eventually, the S19 astromech engineering designs were lost when Avance merged into another government. Due to the model's lack of success, the loss of its designs were not considered significant and no effort was expended in reverse engineering the droid. Due to this, the S19 astromech is a rare sight in the galaxy to this day due to the minimal production run caused by low public sales. While the model may not have reached widespread success, its other attributes have won the model a cult popularity with pilots and mechanics alike who do not want to sacrifice efficiency for personal flair. Its unique appearance also keeps it extremely popular with niche droid collectors as well as tinkerers eager for a challenging project which can include adding in a shield generator, gravity generator, or even a rocket launcher. 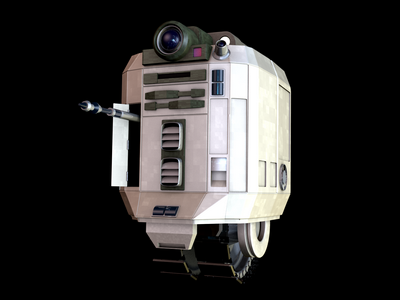