The T7 Series Astromech Droid is one of the oldest of the astromech droids that can still be found performing its duties. The droid is remarkably reliable and surprisingly versatile, despite its antiquated design. The T7 was primarily designed to assist pilots aboard freighters and starfighters, though the droid is perfectly capable of serving aboard capital-class starships as well. The original creators of the T7, in competition with other droid manufactures of their day, took the initiative to include more functionality in the T7 design. Hardware and software upgrades increased the T7 computer interfacing skills and a light blaster was also added and the necessary combat programming loaded into the droid. These advancements, coupled with the construction of the droid, are the reason for its persistent existence in the galaxy.

The head of the T7 is circular with different sensor units and packages spaced equally around it and provide the droid with a compete readout of its surroundings. A single, large photoreceptor is mounted on the top but faces only one direction, though the head is able to swivel about as one unit. The casing of the T7 is rather durable, which is a contributing factor to the survival of the droid over the long years since its original release. Twin motivators which help to power the droid by converting energy are mounted in the front within two hardened cases. The body of the droid is able to move about using a three wheeled system. The rear wheel is large and cylindrical and can collapse to the back of the droid for storage and to allow the droid to stand. The other two wheels, which are on legs mounted to either side of the droid, protrude from below tapered blocks. These wheels are able to retract into the block enabling the T7 to walk and negotiate terrain that is unsuitable for wheeled travel. 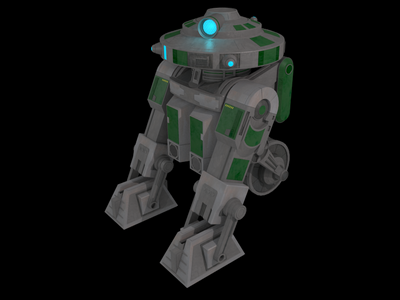