The C2-R4 droid is mostly likely the result of a failed project by a droid manufacturer attempting to create a multi-purpose droid from surplus parts. Cobbled together from an interesting assortment of droid parts, almost every piece belongs to a different droid series. The R-unit body is easily recognizable and the treads are common enough, but to the average sentient C2-R4 looks like a junk pile that has come to life! The droid is also able to speak Basic as opposed to Binary; a result of its programming which is from a Protocol unit. The droid's designation C2-R4 represents the main components of its construction: C2 for its protocol programming, R4 for its body.

The random parts give C2 a combination of skills. Redundant sensors systems found throughout the droid provide it with extra awareness of its surroundings, and two pairs of appendages, both in the front, allow C2 to be used for common labor tasks. One pair are short and strong, while the other pair are long and whip-like. Oddly, since the droid is not equipped with military programming, these C2-R4 units have been known to use their whip-like appendages in self defense. Most speculate that the C2-R4 units have a realization that their own existence is rather unusual and, grateful to be alive, they will defend themselves when necessary. More likely however, is that their construction incorporates some piece of military hardware.

C2-R4 can be seen throughout the Galaxy, with each owner finding a new and varied way to employ the droid and its assortment of parts - which are almost as random as the parts themselves. While some may look at C2 and see only a "pile of junk" there are others who are partial to the droid, appreciating the departure from the more pristine models of the day and favor a droid with versatile skills. A limited number of C2-R4 were produced before the line was scrapped. 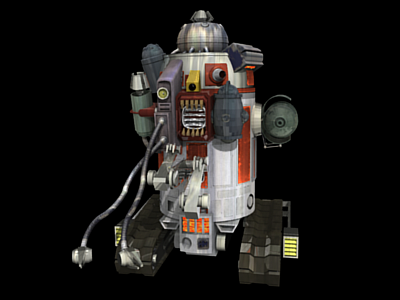