R5 units were built to be cheaper than the previously more popular R-series droids. The initial assumption was that customers would prefer "cheap" over "well built". To achieve this reduction of cost, the astromech was redesigned using cheaper, bulkier parts in place of the more miniaturized versions. In many cases programming and items that were deemed superfluous were simply dropped from the unit. Unfortunately, patchwork programming and cheap parts has caused the R5 to be known as a droid plagued with a number of technical glitches and a less-than-stellar personality.

As would be expected from a redesign in programming and a reworking of the inner components, the R5 line of astromechs has reduced functionality in some areas when compared to the bulk of the R-series. Most notably the droid has no ability to handle computer operations. Designers hoped that the droid's enhanced ship repair functions would offset this drawback, which for some it has. Additionally, the larger components, especially in the head section of the droid, gives the droid a higher profile and therefore a higher chance of being hit in combat when plugged into a starfighter.

Despite their drawbacks, many R5 astromechs saw service during the Clone Wars alongside the other R-series astromechs. As with the more popular R2 series, R5s were plugged into fighter craft to help with repairs and navigating. They also saw service in larger capital ships, though usually in the hangar sections of the craft, taking care of repair and maintenance.

Many R5s still see service in the current civil war raging across the galaxy, often being used as repair and maintenance droids. Occasionally a fighter pilot will use an R5 as his primary astromech because he deems the reduced cost to outweigh any potential drawback. Regardless of the usage, the droids are thousands of credits cheaper than the most popular R-series droids, which is what designers were aiming for. 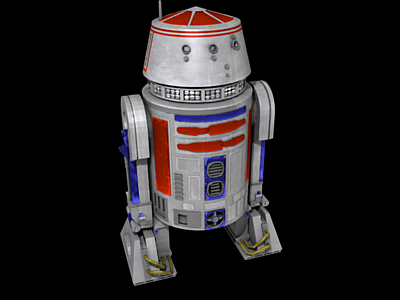