Preceding the R-series of astromechs, the T3 Utility Droid was among the first droids capable of making ship repairs in flight. While less mechanically dexterous than later models, the T3's ability to interface directly with the ship's computer for diagnosis of both mechanical and electronic errors was a key selling point during its peak.

As with other utility droids of the era, the T3 has four, wheeled legs attached to its chassis by rotating joints to allow the droid backwards and forwards movement as well variable heights. The droid's disc-like head contains its computing hub and prominently features its main photoreceptor, as well as two secondary components. Also attached to the unit's "brain" are broadcast antenna and a vocabulator to allow for binary vocalization.

The T3 suffers from similar design flaws of its progeny, the R2, and has a tendency to achieve increasingly quasi-sentient behavior routines with active use. Without adding a complete memory wipe to systematic maintenance routines, the unit can become plagued by bugs and glitches. There have also been claims of T3 utility droids "going rogue," with some of these reportedly employing their specialized skills towards criminal pursuits. 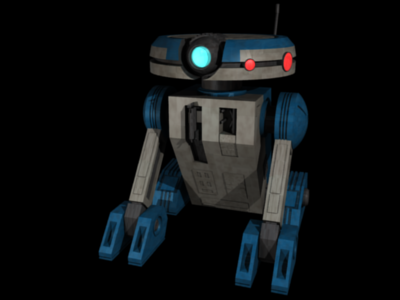