The R2 series is one of the greatest successes in the astromech field. Considered a significant upgrade from its predecessor, the R1, the R2-series has maintained its popularity since its release prior to the Clone Wars. Originally marketed with the colloquial slogan: "There is nothing that this little guy can't do!," early reviews of the R2's repair capabilities were favorable, which helped to drive boisterous sales. The droid's popularity only increased as it was later adapted for starfighter duties and demonstrated great increases in starfighter performance. Still as popular as ever, the R2 series has been modified and upgraded several times, maintaining its competitiveness in the crowded droid market.

Like the R1 astromech, the R2 was created for vehicle and spaceship repair with a compact design that enables it to fit easily in a common starfighter. When 'plugged' into a ship, the R2 droid can monitor flight performance, fix technical problems, and can give power boosts from the ship's energy source.

The R2 is programmed with over seven hundred ship configurations, making it much easier to use than previous astromech models. When first released into the public, buyers were lured by all of its tools and gadgets. The common production-model R2 includes two manipulating arms, circular saw, holographic projector, and fire extinguisher. However, because it is so easily adjustable, many owners add additional tools and R2s have been found with underwater propellers, zero-G maneuvering jets, and small life rafts. 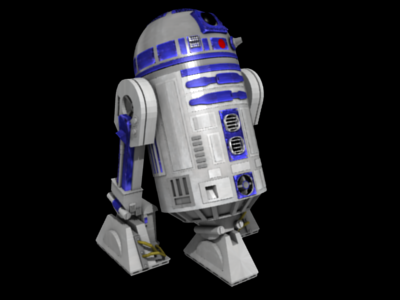