During the rise of the Empire, the rebellion was forced to create bases in remote and nearly uninhabitable areas of the galaxy where they would be able to avoid detection and garner support. The Rebel Snow Armour was designed during those days to increase the survivability of rebel troops stationed in icy locations such as Hoth that maintain harsh climates. The insulation and low-power heating elements interwoven into the suit allow the soldier to stave off environment-related injuries like hypothermia and frostbite for long periods of time.

The basic design differs from the standard rebel armour thanks to the added feature of repelling the cold. In order to provide insulation and heating, some of the protective armour elements were eliminated in order to minimize movement restrictions. Its layered body wrapping made with cheap but effective materials, along with inserted micro plating, allows for it to be quickly and cheaply produced. This is an important factor, because the armour has become a necessity to soldiers fighting in harsh environments. The armour is also covered in a white fabric to camouflage the soldier against the snow and ice that is typical of cold planets.

Like many other forms of cold weather armour, there is a built-in advanced communications hub which allows troops to effectively communicate and stay alive should they get injured or stranded in a hostile environment. In addition to a communications system, this armour also has a number of pockets and pouches designed to store additional cold weather survival equipment such as self-heating rations and signal flares. A full armour set also includes well-insulated boots with high grip treads designed for ice travel. 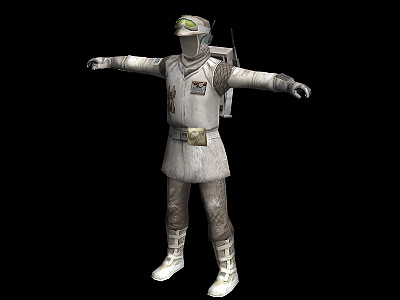