Most species that have heads place a high premium on keeping them intact while fighting. As a result, once a primitive species progresses from banging rocks to banging skulls, some clever sentient usually devises some sort of head protection in short order. Because of this parallel invention, almost all species are known to wear some sort of headgear when danger threatens. A flak helmet offers basic head protection with few (if any) extra features. While outward appearance may vary, the flak helmet is essentially simple durasteel alloyed with quantum for added protection and shaped to cover the wearer's cranial physiology. Chinstraps are a common design element, but they are by no means universal as many species cannot use them. The flak helmet protects the wearer against blunt force attacks, shrapnel, and even small arms fire, but the exposed face means it is no match for a determined marksman. The flak helmet also lacks the enhanced electronics found in its upgraded cousin, the tactical helmet.

Specialists who may experience combat but primarily serve in rearward or support positions are more likely to use flak helmets than those in front line combat. While these personnel find it wise to wear some armour as a precaution, their roles often demand greater freedom of movement or range of vision than a more substantial helmet can permit. It can be difficult to operate a holodisplay or treat a patient with one's face enclosed. Pilots are a notable front line exception. While their ships or vehicles typically provide the bulk of their armor, many opt to wear flak helmets (especially if their craft do not require environmental containment gear) in case they find themselves unexpectedly out of their cockpits in a combat zone. In such cases, the flak helmet's basic defense can mean the difference between telling the story at the bar back home or being the subject of someone else's tale. 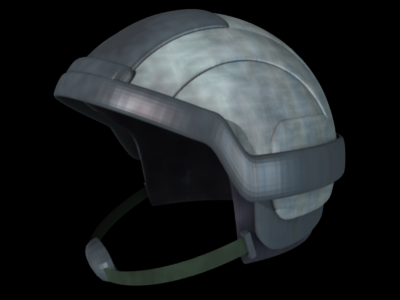