Jakku's harsh desert terrain and remoteness necessitated a low-cost means of transportation adapted to local conditions. Imports were rare and expensive, leaving the inhabitants to construct their own vehicles from spare and scavenged parts. Each vehicle was as unique as its designer, but this bulky and relatively unsophisticated speeder eventually became the most popular model for those who had to travel the long distances between outposts and salvage sites. Without much creativity or thought, it has simply become known as the Jakku speeder.

Most of the speeder's mass is taken up by its engine, which is cooled by a large, front-mounted air intake. While the Jakku speeder is slow compared to other similarly-sized speeders, while its lower cost and complexity make up for this speed deficit. In order to achieve the necessary reductions in cost and complexity, only two seats were included and no dedicated storage space was made available. However, users often modify their speeders with cargo nets or other basic concepts to increase the cargo capacity.

As it was designed for Jakku's conditions, the speeder suffers from a bulky design and lack of sophisticated stabilisers. While this prevents the vehicle from being very manoeuvrable and severely limits the terrain where the Jakku speeder can be most effective, it allows to perform exceptionally well on flat, unobstructed surfaces.

Due to its simple construction, impressive torque, hardy frame, and shallow learning curve to operate, the Jakku speeder has become popular with local courier services, independent scrappers, and salvagers throughout the Outer Rim. On planets where luxury or racing swoop speeders are less common, modified Jakku speeder races have taken their place. 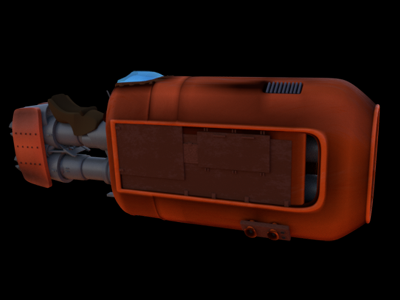