Located in the Starforge Nebula within the Ado sector, Starforge station was constructed by a group of small-time smugglers. In order to build the station, they used the remaining wreckage from the many war-torn starships that had come to rest there. Considering the varied origins of these vessels, the smugglers decided to keep a stance of neutrality in the Galactic conflict.

Due to being built from leftover ships, this station had a very unique look and configuration. The layout afforded more common amenities, such as personal rooms, diners, and repair shops. There is also a rumor about the Starforge having a shipyard within, yet nobody has ever been able to verify this.

The station also boasts a large docking area with multiple bays. This allows Starforge station to accommodate their extensive defense force, which consists of dozens of fighter squadrons and freighter class ships. In addition, these massive docking bays have also serviced ships from many different facets of the galaxy, such as the Galactic Empire, New Republic and the Confederacy of Independent Systems.

No matter which ships call the station home or who controls it, Starforge continues to be a place for those fortunate enough to find it and a beacon that calls out to those that need it, regardless of allegiance or race. 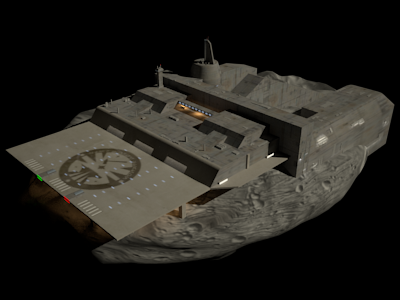