The Wheel was designed with a single purpose in mind: to provide the ultimate hedonistic adventure. Situated within the Besh Gorgon system and nestled within a pocket of deep space, the Wheel operates freely from the rule of any government. The station is home to a multitude of pleasures and pastimes and ensures some form of entertainment is available for everyone - whether that involves gambling at any of the premier casinos on board, or watching the blood sport offered by the gladiatorial arena housed within the heart of the station. A large ring wraps around a massive center which is known as the Hub and together the two appear as a "wheel." The ring portion of the station is equipped with a large number of docking ports which are able to accept many ships of various sizes and designs. The docking ports extend out and away from the station by way of long turbolift tubes and give the station a spiny appearance. The ring is mated to the inner Hub by two massive arms which facilitate movement throughout the station.

Most luxury accommodations and main attractions can be found in the Hub, but the ring is also home to living areas and countless shops, clubs, spas, casinos, and other places of activity and interest. Among the attractions found aboard the Wheel, which also made the station famous, are the Crimson and Grand casinos. Two of the largest casinos in the galaxy, the Crimson and Grand reside within the Hub and truly define the height of luxury. They provide their own accommodations for distinguished guests, all the best games of chance, an armed escort for winners, lavish comforts and decorations, and unlimited drinks. Another attraction found on the station, though of a more controversial nature, is the large arena located deep in the heart of the Hub where gladiators fight to the death. The arena is housed within a thick transparisteel bubble to protect spectators. The environment within the bubble is fully customizable and options for gravity, terrain type, and obstacles are available. Gladiators, creatures, and others who are forced to fight routinely participate in the games as teams or free-for-all and make use of a large array of weaponry and vehicles during their quest for fame and glory in the ultimate showdown.

Security on the Wheel is sophisticated with a master computer, known as Master-Com, overseeing most aspects of the station. Master-Com was given several droid bodies into which he could project his consciousness and move around the station. This gift was unusually generous and was a gesture of droid-human friendship by a previous administrator. Physical security on the station and in the space around it is provided by a competent organization known as the Wheel Security Force. The station is not without crime, though most infractions and offenses occur in the lower and seedier levels of the station. Each ascending level is more prestigious and expensive than the one below it and the access requirements increase with each subsequent level too, thereby reserving the upper levels for the socially elite. The crown of the Wheel is the Executive Tower located at the very top of the Hub. The station administrator lives and works in the tower, which is lavish by its own rights, and stands as a pinnacle to wealth and success on a whole. Though surrounding governments have tried to exert a certain amount of influence and control over the Wheel at various times in history, the station continues to operate securely and independently; a combination which has always facilitated profit and opportunity for the many inhabitants of the station. 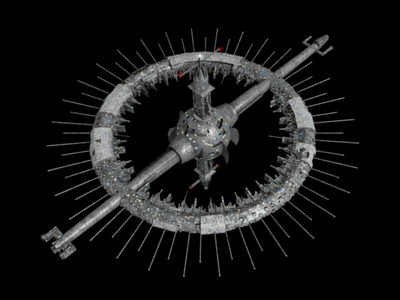