Often on dangerous, rural worlds such as Tatooine or Dantooine, settlers utilize lookout droids like these to monitor their property lines against bandits, looters, or dangerous local fauna and have been doing so since the age of the Galactic Republic. They are often either cheaply mass-produced or cobbled together from other droid parts by scavengers, such as Jawas or Ugnaughts, and sold to civilian farmers and miners. Due to their availability and affordability, lookout droids like this are also often found being utilized as simple recon and probe droids for small militias, bandits, or paramilitary organizations. For example, the X2-R model was frequently seen in the employ of crime syndicates on Nar Shaddaa during the age of the Galactic Republic.

Models vary depending on their intended use but almost all heavily feature an optical sensor array, long-range transmitters, and holo-recording software. The data and images gathered by the sensors are then relayed to a datapad or control station. Most also come with a standard array of features such as manipulator arms, repulsor engines, and a blaster. These modules come in handy with the wide variety of roles that these droids are pressed into performing on low-income worlds, such as simple labor on farms or home defense, as well as serving as pseudo probe droids for militias and the like. Due to their relatively weak hulls, models like this rarely see action in serious combat roles within wealthier government or military organizations. 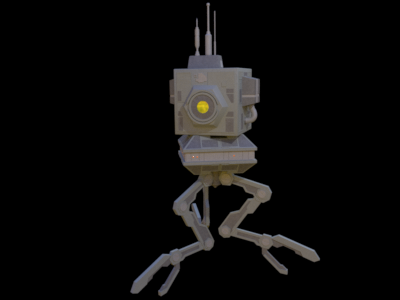