K-4 Security Droids, also referred to simply as K-4, were first developed by RIM Securities Company for security use in the Outer Rim. Because of their low cost, they have become extremely popular with pirate, smuggler and mercenary forces, and are finding mounting popularity with more legitimate groups too. As these droids have become more easily accessible, several system governments have even complemented their security forces with them.

The K-4 is equipped with a built in blaster rifle and its core components are protected by durasteel armor. The droid's large, boxy head, one of its more unique features, has turned out to be a disadvantage as enemy snipers can easily spot and target the K-4 from a distance. Aside from its head, the K-4 was created to have a roughly humanoid appearance.

The Derra Conflict of Year 14 has propelled these droids into unparallelled usage as they are a cheap and ready resource for security and even some military operations. It is said that the planet of Derra IV is a virtual graveyard of K-4 droids as their parts and wreckage are strewn across vasts swathes of land. While this report must be viewed with a certain amount of skepticism, it does indicate the overall usefulness of the K-4 and it's unlikely to decline in sales anytime soon. 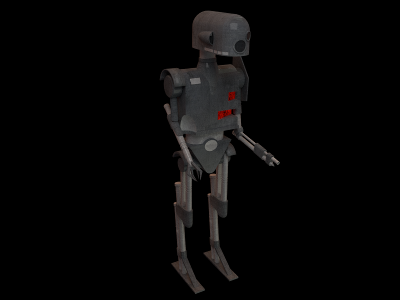