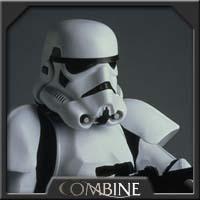 Imperial Stormtroopers form the Empire's elite shock troops. They function in a support role, Stormtrooper legions augment both the Imperial Navy and Imperial Army. Their distinctive armour makes them a recognizable and feared force throughout the Galaxy.

Stormtroopers are assigned to where the need to crush resistance is felt. These troops are totally loyal, and may not be bribed, seduced, or blackmailed. Trained apart from the typical Imperial soldier, these troops are built for combat. They follow a Chain of Command that answers directly to the Emperor, and are often used to keep Imperial Ships loyal. Their world is one of militaristic discipline, obedience to the will of the Emperor is unquestioned. The only time this force has been in disarray was during the famed Core split, where two Emperors opposed each other in their rules.

Where these men underneath these suits come from is a mystery, that adds to the fear and secrecy that surrounds them. Trained to work together, they are experts at using judicious amounts of violent force. Stormtroopers have come to represent the might of the Empire.

Each trooper wears the standard white and black, 18-piece armoured spacesuit. This is worn over a black temperature controlling body glove. The common trooper also carries a blaster rifle and at least one fragmentation grenade.