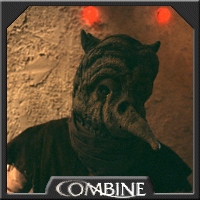 The H'nemthe are humanoids that resemble Gotals in that they have cone-like appendages on their heads. That is where the resemblance ends, though. Gotals only have two cones, while the H'nemthe have four. They are native to the planet H'nemthe. The H'nemthe have blue-gray skin, and their faces are covered with three ridges of bone and skin running from their cheeks to their chins. They have graceful noses and feathery eyelashes covering bright green eyes.

The female H'nemthe have silver, knife-shaped tongues, which are used as part of a bizarre mating ritual. When a female consummates her relationship with a male, she eviscerates him with her tongue, leaving him for dead. It is believed that this ritual is a biological reaction to the existence of twenty males for every female on H'nemthe.