The BN-D0 model is an assassin droid designed and employed by the Twilight Foundation. Impressed with a specialized B-1 battle droid's almost successful assassination attempt on him, Twilight Foundation President Alejandro Brotingo ordered his engineers to create a new droid uniquely suited for assassination. Despite a widely-accepted ban on assassin droids, the foundation developed the droids to both eliminate the heads of rival organizations such as the GenSci Institute and protect its own executives from similar attempts.

The BN-D0 assassin droid is essentially a mashup of several different droids. The B2 super battle droid's heavy blasters were developed into specialized blaster pistols, granting the BN-D0 much more firepower than the average battle droid. The frames of both the B1 battle droid and sentinel droid models were used as inspiration for the assassin design, though lighter alloys and advanced technology were incorporated to ensure that the BN-D0 boasted a higher maneuverability and movement speed than its influences. The head of the BN-D0 serves multiple purposes and is backed with an impressive array of technology. The antenna broadcasts electronic countermeasures to shield the droid from sensors and allows for medium-range communications without the assistance of a signal booster or control ship. The droid also contains specialized reconnaissance software and hardware that grant it a longer sensor range than most battle droids.

Despite that the assassin droid is associated primarily with the Twilight Foundation, customized models have also been seen serving as scout and hunting droids for extremely wealthy individuals. Its ability to climb trees and cliffs to reach a target is unrivaled, as is its ability to remain undetected. Twilight's models have even been recorded escorting foundation executives while wearing humanoid clothing to blend in. Due to the highly adaptive and autonomous programming required for an assassin droid to be successful, it has been reported that the BN-D0 model can develop its own personality and, in some instances, a concept of superiority towards biological humanoids and even unsophisticated droids. Due to these possibilities, the Twilight Foundation keeps a close watch on each of its BN-D0 models, quickly dismantling any of the droids that begin to exhibit unusual behavior. Conversely, the foundation also maintains a strict stance against wiping the droid's memory, insisting that the learning process can be shared amongst all of the model's units to improve their overall combat operations.

While the BN-D0 model is a rare sight in the galaxy, they can always be found guarding the Twilight Foundation's executives and facilities. The proprietary droid model is also rumored to be behind several assassination attempts against the GenSci Institute's executives, though no concrete proof has ever been submitted to the galactic public. 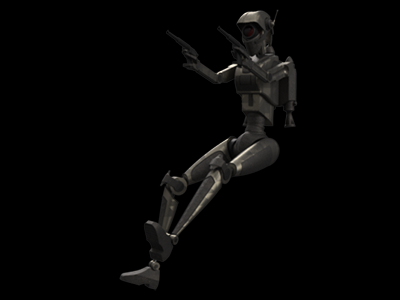