The Howlrunner is a vicious carnivore native to the planet of Kamar. They hunt in packs as large as four and have even been known to ambush and kill creatures significantly larger than themselves. Reports of hearing packs of these beasts howl are common, and they are the source of many popular folk tales among sentients who live in close proximity to these creatures. It has been claimed that these beasts can be heard for miles on clear nights. It is this distinctive howl that has given the Howlrunner its name.

A fully grown male can be almost two meters long and weigh up to seventy eight kilograms, while females are slightly smaller in size. Their mating habits sometimes require them to travel hundreds of miles in order to find a companion to breed with. This leads to them being found on a wide variety of terrain; as a result, a large number of sub-species have developed unique adaptations to different environments. The most distinctive variation between each sub-species is the color of their outer fur, ranging from light brown to black.

The most notable physical trait all the sub-species share is the cartilage and bone layers that form over their faces. Most scientists agree that this has evolved to provide protection when attacking more aggressive prey with their powerful jaws. It also allows them to burrow and tunnel through rocky ground to make their underground dens.

Another benefit is that it can strike fear in to sentients who recognise the shape as a skull, a symbol of death in many cultures. When this is combined with their howl, this gives the creature an effective means to disorientate their prey and make them vulnerable to an attack. A pack of Howlrunners will use this to drive their prey further and further from safety, until their target, or targets, are too exhausted to put up a defence.

Their "bone masks" are also highly valued trophies among reputable hunters and novices alike. So sentient beings have capitalized on this popularity and introduced them into gaming lodges, allowing the wealthiest of galactic citizens to hunt fearsome creatures such as the Howlrunner for pleasure.

Despite their aggression and fearsome appearance, the Howlrunner is also hunted for food by the sentient insectoids who are natives to the planet, Kamar. Some sentient beings have even managed to keep these canines in captivity so they can be used in animal prize fighting.

As a result of their wide renown across the galaxy, the Howlrunner has made its way in to popular culture, often being used to name military ships and other similar entities. This popularity, and fearful reputation, did lead to the creature becoming an endangered species, however a concentrated effort to protect their numbers has been met with success and they have become a common sight on many worlds once more. 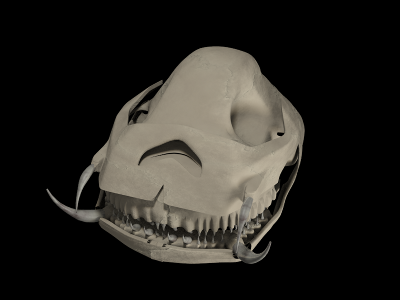