Commonly referred to as Emdees, the MD Medical Specialists were marketed as medical droid companions for sentients who didn't want to hire medics to accompany them during times when easy access to hospitals might not be available. The Emdees quickly became favored by many such as mercenaries who felt doctors could be bribed too easily and explorers who spent their time investigating the furthest reaches of the galaxy. Programmed with thousands of the most common languages in the galaxy and capable of administering basic first aid, Emdees can be seen everywhere from inside family homes to medical teams onboard private ships.

With their designs based on protocol droids, the Emdees appear sleek and streamlined, mimicking the shape of a basic humanoid. They have no reinforced frames or thicker armor, giving them an almost skeletal appearance. Every part of their body is carefully rounded, leaving no sharp edges that might accidentally harm others while delivering treatment. They have ball-and-socket joints that allow them a greater range of movement. Each of their arms can be switched out for various types, but the most common are ones with basic gripping claws to pick up and move various objects and the hypospray attachment that allows them to administer shots and vaccines to patients. Their legs also have multiple joints for greater balance and can be extended or retracted in several places near the top so they can treat different species of varying heights with greater ease.

Overall, many sentients are more used to interacting with Emdees than any other kind of medical droid. Their ability to interact with organics makes them very popular, especially among younglings. While only capable of basic medical treatment, it is not uncommon for scouts, pilots, and other sentients to share stories about how the quick actions of their Emdee droids saved their lives, most commonly by providing emergency care that gave them enough time to reach more advanced medical professionals. 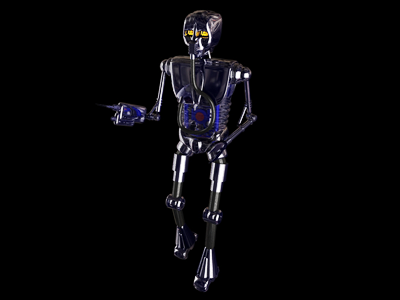