Originally developed by the Corellian Engineering Corporation, the YV-929 light freighter was meant to be the businessman's solution to the rising numbers of pirates and hijackers across the galaxy. The design took inspiration from earlier models of the YV series, retaining the typical cockpit shape and placement seen most recently in the YV-666, but scrapping the overall triangular shape in favour of a more compact rectangular hull.

The construction team behind the YV-929 put heavy emphasis on self-reliability and durability, as well as numerous defence mechanisms and weapon systems to deter any would-be assailant from approaching. The result was a freighter equipped with an array of laser and ion cannons, several missile batteries, and a hull sturdy enough to allow the YV-929 to hold its own against most threats that lurk in the darker corners of the galaxy. Primarily designed to combat pirates, the ship had an impressive sensor package installed, giving the pilot ample notice of any hidden adversaries. To further bolster its anti-piracy measures, the YV-929's engineering team also included a rarely-seen feature in their design: the ability to fire most of the installed weaponry to the aft of the ship, allowing fleeing ships to fire back at their assailants.

The sheer volume of weaponry attached to the ship caused issues with more rigid customs officers and military patrols around the Core Worlds. These officials pressured numerous regional and sector governments, effectively discontinuing the "flying brick", as the YV-929 was unofficially dubbed, and ending its production run. Ironically, the ship found a new home among pirates in the significantly less lawful territories of the galaxy across the Outer Rim, arming the very groups it was meant to combat. 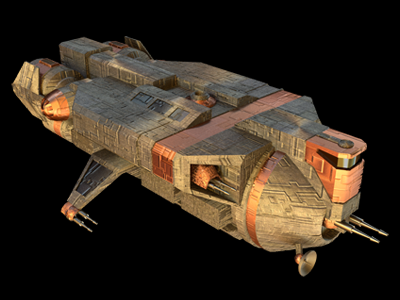