Unfortunately for Ghtroc Industries, who originally designed the ship, the Class 720 Freighter did not attain its current level of popularity until after they had gone out of business. The dissolution of the initial Ghtroc Industries group saw the loss of the rights and blueprints for the freighter. Though a capable vessel, it simply could not compete in a world dominated by the Corellian Engineering Company's YT series. Ironically, it was this same lack of acceptance that earned the ship something of a cult following among smugglers, who appreciate its ability to seem completely unremarkable to customs officials. However, thanks to the 720's ease of customization, the interiors are often full of ingeniously hidden compartments.

Sporting a larger cargo hold and passenger capacity than most freighters of its class, and a unique engine configuration that affords it impressive sublight speeds, it in many ways outperforms those ships which drove it out of production. The engine positioning, though, has drawn complaints from many less nimble mechanics, who often find themselves running back and forth between them during more intense situations.

Despite this, many Class 720s remain in service today, a testament to the workmanship of the original engineers. Usually highly cherished by the spacers who have taken the time to get to know them, it can often be difficult to obtain a Class 720 for anything that might be considered an affordable price for a ship of its class and size. 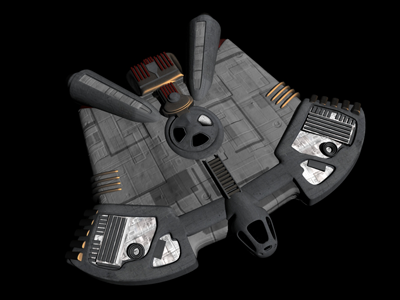