The 578-R Space Transport was designed and built by Amalgamated Hyperdyne and Refuse Management to expand their range of services by producing a universal cargo ship for the open market. The task became much more complicated than they initially planned for, especially for a corporation geared towards recycling and waste management. Projected to bring in great profits, the ship, in turn, brought disaster and bankruptcy to the company. Many components were faulty and some were even missing, a problem found by many on their first voyage in the vessel. With little interest in quality control, the producers used cheap parts and enforced only sub-par quality standards. This lack of interest in creating a safe and quality product was a major reason for the ship's failure on the galactic market.

Despite the many drawbacks of these transports, some ships still serve as light cargo freighters throughout the galaxy. Although compact in design, the ship consists of two decks. The main hold and workshop taking up the entirety of the lower deck while the upper deck is comprised of the cockpit, crew cabins, and engine room. According to the ship schematics, only a two man crew is required for full operation of these vessels, each with their own quarters.

In addition to the single heavy laser, the 578-R is clad in heavy armor to help defend against small bands of pirates. Alongside the defenses, the ship's modular design and overall simplistic design highlights its usefulness. Even though considered to be one of the worst production failures of the era, the 578-R remain popular among transporters due to the high availability of spare parts and ease of customization, upgrading and maintenance. 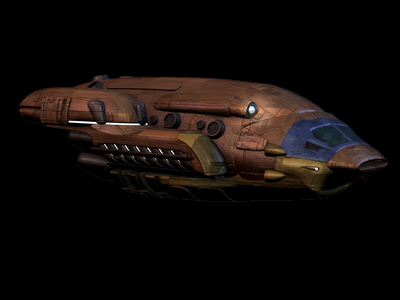