Developed and designed by the now extinct Seoularians, the RIC-series droid, most commonly just referred to as the RIC, is a simplistic labor droid intended to replace beasts of burden. Specifically, they were designed to pull rickshaws, a light two-wheeled hooded vehicle created to carry passengers over short distances.

Standing at a little over one meter tall, the RIC's insectoid-shaped head and large disc-mounted continuous track distinguish it from other droids. Due to the droid's very simple function and purpose, the RIC's design has never been updated or changed over centuries and has maintained its primitive, rudimentary appearance. The external plating of most RIC droids is made out of cheap quantum derivatives typically scavenged and recycled from the remains of broken droids. The RIC possesses two simple arms ending in three-digit hands, used to pull rickshaws or carts forward. Despite the RIC's wonky and simplistic appearance, the droid is capable of traveling faster speeds than most droids, showcasing the creator's somewhat hidden droid engineering skills.

The RIC, perhaps due to the galaxy's preference of repulsorlift technology over archaic wheel designs, ceased production long ago and the droid is more or less a rare sight to see. A few nostalgic owners have kept RIC droids as a symbol of the past, with some corporations exploiting this nostalgia by selling collected droids at drastically higher prices. With the recent discovery of the blueprints, the engineering specifications became non-proprietary and open source to the public. As a result, newly-produced RIC-series droids are slowly returning as a common sight around starports. 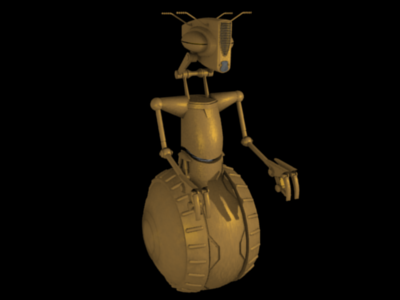