The Heavy Battle Armour was designed with one use in mind: to provide its wearer with the highest degree of protection possible during battlefield combat. When worn in conjunction with the Heavy Battle Helmet, the wearer benefits from the highest level of personal protection available. This is due to the multi-layered, high strength durasteel plating fused with high grade quantum for a tough armoured shell. The wearer is able to take numerous close range blasts from small arms fire with minimal loss to the armour's integrity; tests have shown that the suit can also withstand a close range round from an NZ 9118 without penetration.

Although the Heavy Battle Armour provides superior protection, it does face a number of drawbacks. The armour layering is so thick that it weighs nearly 15kgs; lacking any powered assist servos, only the strongest soldiers can wear it for extended periods of time. Due to its bulk and the visibility reductions when worn with the Heavy Battle Helmet, the user may suffer from a reduction in speed, agility and peripheral vision. This has a significant impact on the ability to avoid incoming hostile fire and react quickly in close combat situations.

The sense of invulnerability when wearing this suit is also a risk to be managed by the wearer. During the Jedi Civil War, when the suits were first produced, squadrons of soldiers were sent into the field wearing Heavy Battle Armour, a daunting sight for any opposing force. Nearly impervious to light weapons fire, they would boldly, if a little slowly, cross the battlefield towards the enemy. However, owing to the soldiers' low speed of movement and reduced manoeuvrability, the soldiers were easy targets for seasoned field battalions carrying heavy weaponry and explosive devices. Whilst a close range shot would be unlikely to pierce the armour outright, a well placed shot from such a weapon would often concuss the wearer leaving them disoriented and vulnerable for follow up attacks. Battle tactics have since been revised and heavy armour units are rarely seen in the field without the support of light infantry or mechanized units. 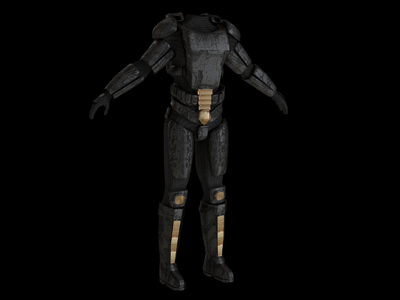