The Merr-Sonn Mark II Rotary Blaster Cannon, often shortened simply to the Merr-Sonn Mark II, is Merr-Sonn’s first commercially successful entry into the heavy blaster market. The Mark II is an old design, having been developed many years before the decline of the Galactic Republic, yet continues to be produced to this day thanks to the platform’s ease of maintenance and firepower.

The Mark II’s efficacy lies in its design; each of its six barrels is equipped with its own chamber, meaning that the weapon can continue to fire even when one or more of its barrels are rendered inoperable. This offers the Mark II tremendous firepower and requires the cannon to be fitted with a tripod as a stabilizer. Unlike other blasters in the class, the Mark II is capable of containing its own power cell or portable fusion generator in the central housing instead of requiring a separate power cell, though it is capable of directly linking to one. While operating the weapon in this fashion makes it more portable and renders the cannon’s operation less intensive on the crew, it unbalances the weapon and leaves it prone to catastrophic explosions when heavily damaged. This can prove to be highly inconvenient.

While better alternatives prevented Merr-Sonn from successfully marketing a large scale military contract, the Mark II became popular among smaller planetary governments and paramilitary groups such as mercenaries or pirates. While its performance as a heavy weapon is marginal, the Mark II remains widely circulated nonetheless. 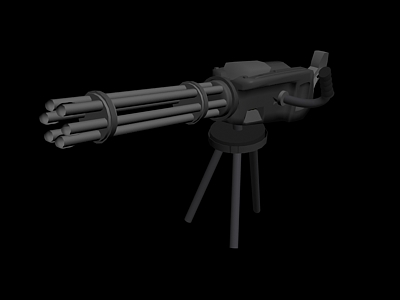