The X10 Patrol Groundcruiser is a support craft whose creation is credited to the Corporate Sector Authority. Unlike its sisters, the SX20 Airskimmer and the GX12 Hovervan, it has the advantage of speed; however its maximum flight ceiling and passenger capacity are not as profound as its siblings.

The X10 was initially built for scouting and patrolling friendly territories, as well as a quick movement method for allies or prisoners of war. First manufactured during the rise of the Empire, before most factions discovered its unique abilities, it was used as a quick goods transport.

Due to the fact that the heavy cannon and repulsorlifts take up a significant amount of room, the X10 has very little volume capacity remaining. Its small size, typically holding a maximum of seven people, makes it ideal for a quick surprise attack and a fast get away. Its light armor means it is vulnerable during these raids but also allows it to manoeuver better on the battlefield than if it were weighted down with the thicker armour plates of similar vehicles. 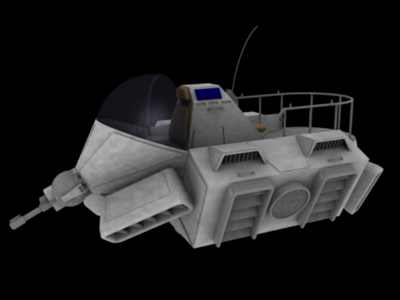