The WLO 5 speeder tank is a repulsor tank designed by an unknown manufacturer during the First Galactic Civil War. At the time, heavy tanks were primarily manufactured by nationalized companies loyal to either the Republic or Separatists. Uninvolved parties, feeling threatened by the war and wanting to protect their own assets, saw a gap in the market. An unknown company sought to design a tank that could hold up against the Trade Federation's Armored Assault Tank and the Republic's TX-130 Saber-class. Although their final design was ultimately weaker than either of the tank models it was intended to compete with, their result provided an alternative for worlds who would otherwise lack heavy armor in their militaries.

The WLO 5 is operated by a crew of two people; a vulnerable gunner sits behind the concussion-grenade turret while the driver, entirely protected by the tank's thick plating, operates the two forward-facing anti-personnel blasters. While primarily designed as an assault tank, it can also serve as a small transport with space for two passengers who can enter and exit from the side doors located in the vehicle's middle section.

With its ease of use, repair, and modification, the WLO 5 quickly became one of the preferred vehicles of pirate gangs across the galaxy. Today, the tank is a rare sight except on backwater worlds due to an expansion in the tank market, including stronger models, that has continued since the end of the Clone Wars. 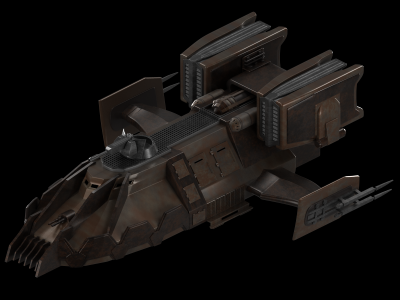