The Chir'daki Deathseed, an "ugly" type starfighter, is a Twi'lek amalgamation of the X-Wing and TIE/ln Starfighter designs. Unlike most other "ugly" models, Deathseeds are not cobbled together from available parts, but are built to a standardized design using the best traits of the two original ships.

Each Deathseed consists of four X-Wing strike foils, with engines and heavy lasers intact, attached to a gyroscopic collar mounted on a standard TIE Fighter pod. The gyroscopic mount automatically rotates around and stabilizes the cockpit in flight, allowing the pilot to perform advanced attack maneuvers with ease. The ship utilizes the TIE's twin ion engines for propulsion while the X-Wing's engines power the hyperdrive, shields, and heavy lasers. This method of power distribution means that the fighter does not need a dedicated central power plant, thereby reducing both the ship's weight and overall cost. However, the Deathseed is slower and less maneuverable than a TIE/ln Starfighter, and less durable than the X-Wing. The ship is armed with the X-Wing's four heavy lasers, but the designers chose not to include torpedo or missile launchers as the ammunition for both proved too difficult and costly to acquire.

Despite its drawbacks, the Deathseed has shown itself to be exceedingly effective in combat tests, especially for a fighter with such a low cost, and at one point in time was adopted by the local Twi'lek government for their defense force. A large number of these fighters have found their way to the open market and are mainly purchased by pirates, smugglers, and private defense groups looking for small, inexpensive ships to complement their fleets. 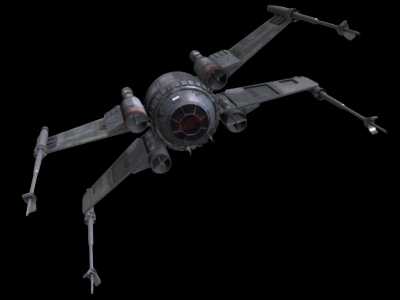