The sturdy and rugged ARC-170 was designed with both offensive and defensive capabilities in mind, making it useful as both a scouting vessel and as a heavy fighter. The 5,000 light year hyperdrive combined with a strong sensor array make it ideal for extended solo missions. The flight design of the Aggressive ReConnaissance (ARC) fighter requires an astromech droid and three crew members to reach its maximum level of efficiency: a pilot and two gunners.

The narrow spaceframe flanked by large engines gives the craft a bulky appearance. It carries powerful weapons in the form of proton torpedo launchers and heavy laser cannons mounted on the wings and tail. Additionally, the ship contains forward-housed sensitive long-range sensors for its snoop missions. Its extendable s-foils radiate heat and serve as a conduit to deflector shield energy. They also help stabilize atmospheric flight, making the ARC-170 an effective aerial fighter. All this powerful equipment makes the ARC a slow mover except in the cases where it uses its shield projectors to dissipate heat during atmospheric flight, protecting it from the dangers of overheating as it reaches supersonic speeds.

Even though the ARC-170 is no longer being used by any major governments or organizations, it is still in common use by collectors and freelancers. It continues to be a capable ship, despite the advent of fighters with speed, armor, and weapons that surpass the heavy laser and proton torpedo armament and durable armor of the ARC-170. Despite these inferior aspects of the fighter, many freelancers still actively employ the ship. 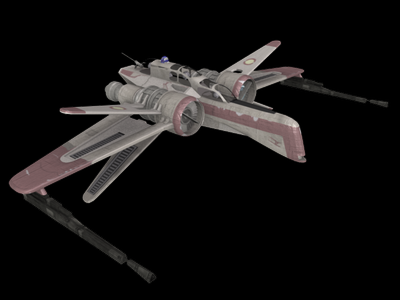