When designing the Foray-class Blockade Runner, Republic Fleet Systems was asked by the Old Republic Navy to build a versatile ship that could be used in a variety of missions. With this in mind, the engineers looked to utilize every part of the ship. The end result was a ship with a compliment of turbo lasers and heavy lasers, a fair amount of cargo room, and an excellent sensor package.

The Foray's versatile design allowed it to be used in a variety of different roles, such as a war ship, patrol craft, and transport. As a result of this versatility and wide spread use, Forays were seen along many trade routes guarded by the Old Republic. Additionally, due to the ship being in such wide circulation, many mechanics were familiar with the design and able to repair them with ease.

Over the millennia, the Foray's numbers have decreased to the point that they have become a rarity. As replacement parts are more difficult to locate and repair costs more expensive, fewer and fewer parties are interested in purchasing these once treasured ships. However, there are still some businesses, small military forces, and private collectors that still have a use for this classic vessel. 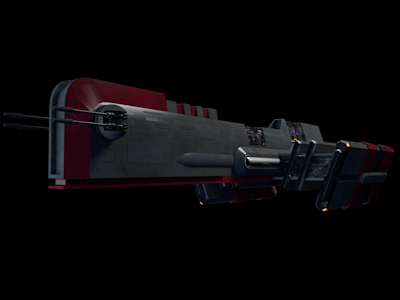