The Revenant wavespeeder is a light, aerodynamic repulsorcraft built to skim along the surface of water at high speeds. This sleek water vehicle was originally designed and marketed as a luxury toy for the rich and famous, especially the thrill seekers with an underdeveloped sense of self-preservation. It uses relatively simple controls with little need for altitude adjustment and a full, high-backed seat for the driver, both setting the wavespeeder apart from more traditional light recreational craft. While popular with a younger crowd, the demand for the Revenant was not as great as initially hoped. More and more began to appear in scrap piles across the galaxy as the initial infatuation faded in favor of faster and more versatile swoops and speeder bikes. The wavespeeder was soon after repurposed by individuals for illicit activities.

Pirates quickly discovered that these discarded skiffs were a must-have for maritime attacks against the same rich and famous that had lost interest in them. These criminals would arm these revived water craft with a forward facing light blaster on each side of the hull. This surprisingly potent armament allowed Revenants to swarm over defenders while the powerful engines let them continue the pursuit of their fleeing prey. The craft's ability to carry a single passenger alongside the pilot gave them the ability to quickly deploy boarders who often used their personal weapons to augment the speeder's own during the initial attack.

While pirates aren't generally known for their positive deeds, their actions and ingenuity did serve to revitalize the market of the wavespeeder. Following the pirate's modifications, the original manufacturer made some design changes of their own. Both the hull and sensor systems were improved, as well as the permanent inclusion of the original light blasters that prompted the new variant in the first place. The addition of an enhanced display and targeting system to the controls allowed the speeder to fill the role of a fast para-military craft. Body guards and private security companies in particular, many of whom had been plagued by the pirate versions, made homes for the now superior vehicle in their own fleets. Eventually, even larger military forces found uses for them as swift aquatic scouts. Thus, the modern Revenant, born from recreational craft turned pirate, is still seen in these roles today. 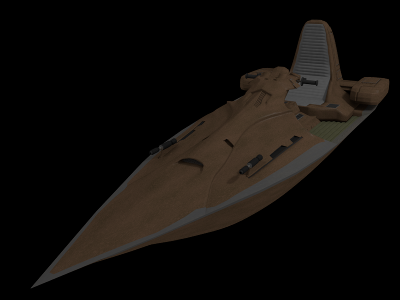