Commissioned by a group of private investors, the Conquest-class carrier was conceived by some of the most regarded minds in the vehicle industry. The goal set forth by the investors had been to create the most powerful and agile vehicle to grace the seas.

The designers packed a lot of features into the carrier, which ended up providing a hefty price tag, with very few being produced. For those that did make it out of the dry dock, they sport features to fit a variety of missions. A hangar bay and eight thousand ton capacity enables the deploying of fighters and troops as an initial response or to support already existing ground and naval forces. An array of lasers and blasters line the sides and top of the ship, yet are also complimented by two torpedo launchers on the lower bow. To assist with detection, an exceptional sensor package was installed. This gave them the ability to detect enemy vessels from kilometers away. A medical bay was installed to service any wounded personnel and to allow the carrier to act as a medical base in an emergency.

Among the most powerful vessels afloat, the Conquest-class carrier is still in use today, whether on a solo mission or part of a bigger campaign. Commonly transported across the galaxy via heavy star freighter, the Conquest-class carrier is at home upon the oceans of many planets, striking an imposing figure towards those that would stand against it. 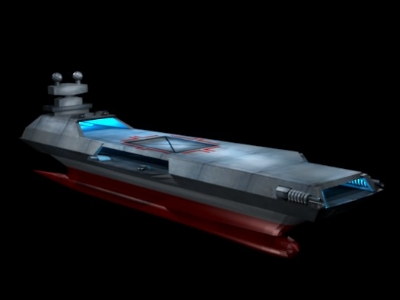