Following the major success of the R2 droid series, Industrial Automaton quickly dominated the droid market, introducing several new astromech droids. Having released the R3 with governments and military in mind, Industrial Automaton designers decided to create the R4 Series specifically for the largely untapped demographic of outer rim pilots. Designed to work in garages, repairing modified speeders and common civilian starcrafts, the R4-series has met with great success since its debut, becoming popular with a variety of organizations and consumers.

With their target market of Outer Rim denizens in mind, Industrial Automation focused on the three most important characteristics a droid needs to be successful in the harsh environments on the Rim: durability, simplicity and affordability. In order to facilitate these requirements, many features found in previous designs were eliminated. Several gadgets, such as a miniature fire extinguisher and display screen, were eliminated to help lower production costs. The R4's computer was designed with a larger amount of space between components, requiring a larger conical dome to house it. Despite the larger head, designers were forced to omit many tools normally found there, and relocate the holo-projector to the top. The R4 units are also impractical for starfighter support purposes as the droid's astrogation buffer can only hold one set of coordinates.

Despite the numerous cost cutting measures in its design, the R4 has become a favorite of many consumers due to its durability. It is capable of sustaining a lot of minor damage common in industrial environments that would hamper most other R-series droids. The R4 has also been found to far exceed its expectations for operational span: weather endurance, personality matrix stability, and retention of battery life. Its Intellex VI computer was upgraded from the R3's design and was specially engineered to work with repulsor crafts and commonly available star crafts. Modified R4s remain particularly popular with the Jedi Order, as their durability makes them ideal matches for Jedi missions. 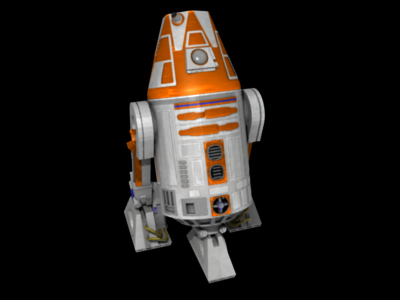